Are There Any Primitive Languages?

Once again, Quora has a great answer on linguistics — and the emergence of language in particular.

As Thomas Wier points out, the faculty of language is far, far older than our own species. And that, surprisingly, explains why there is no primitive language.

No one knows precisely when language began. As far back as we can tell, primates had communication systems more complex than almost any other in the animal kingdom. Vervet monkeys, for example, have different calls for different kinds of predators: leopards, eagles, and snakes. The form of these calls is arbitrary and resembles words, in that no property of the call itself resembles a leopard or a snake. But they are also genetically wired into the monkey’s behavior — the monkeys don’t have to learn the calls. Our remote hominid ancestors must have had speech systems at least this sophisticated.

Then a revolution happened. Around two million years ago or maybe somewhat less, our ancestor Homo erectus began to innovate completely new ways of being and thinking. They mastered fire and invented cooking. This gave them the nutrition to grow bigger brains, which they did in abundance. Bigger brains allowed them to conceptualize geometries to figure out what the inside of a stone looks like. This allowed them to create better and more complex multipart stone tools. They created boats, which allowed them to reach islands like Crete and Flores that were always separated by seas. And late versions of their species probably even had art of sorts, if the geometrically incised shells or the Venus statue of Berekhat Ram indicate anything: 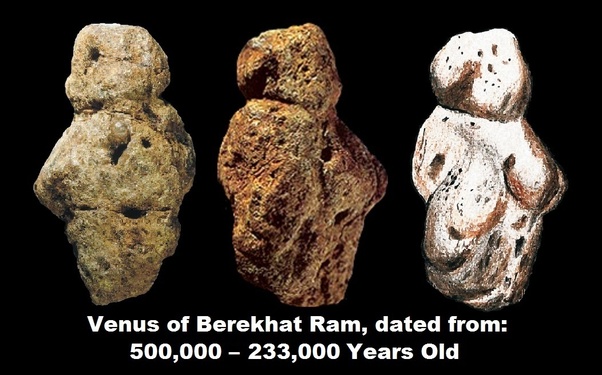 Incised shell from Java, created by Homo erectus dated to around 500k years ago

But what kind of language? Language is a symbolic system of communication, the most advanced form of sign. There are three basic kinds of signs:

Early hominids would have had at least symbolic associations of sound and meaning — effectively the first words. We don’t know exactly how big their vocabularies were, but modern studies involving chimpanzees, bonobos, and gorillas (most famously Washoe, Kanzi, and Koko) suggest early hominids must have had at least many hundreds of distinct words. These early words would have been something like the first syllables: pa, ba, da, ta, etc.

But we need more than words (sound-meaning associations) to have language. Everett argues that the crucial change from our more primitive pre-linguistic ancestors and linguistically modern humans involved innovating at least three additional features.

Second, we needed semantic compositionality: the meaning of utterances was composed of the meaning of its parts (and not other words). Thus “eat bear” can only involve an act of eating and a bear, not an act of sleeping or singing, nor involve mastodons or cave lions.

Thirdly, the system must have linearity: the specific sequence of phonemes inside syllables, syllables inside words, and words inside sentences all matter to the interpretation of the utterance.

Any system that lacks one or more of these features is unquestionably not fully modern linguistically. 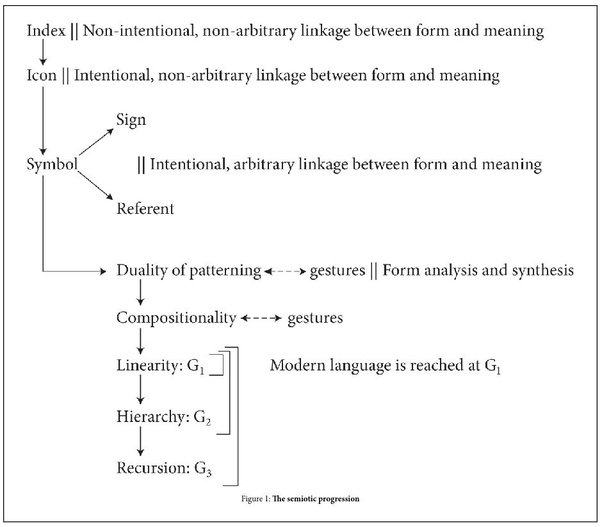 Crucially, according to Everett, our Homo Erectus ancestors had reached something like the level of sophistication reached at ‘G1’ in Everett’s chart, and they did so in a step-wise fashion: first by indexical calls, then by iconic calls, and finally with symbolic words. That is, the semiotic categories constitute a kind of semiotic evolutionary ladder.

But did they ever get any further, and are there any languages today at that level of sophistication?

Dan Everett among the Pirahã

That’s a very controversial notion, and one specific language plays an outsized role in the debate. Everett’s career has largely been dedicated to the study of the Amazonian language Pirahã, a Mura language of the Amazon. Pirahã has a confused and contentious place in the literature on linguistic typology because it has been claimed to violate so many norms of other languages:

These claims are already controversial enough — each of them is contested in one way or another by other scholars. But by far the most controversial claim made by Everett is that it never goes further up the semiotic ladder: he claims that in Pirahã there is no evidence of phrasal hierarchy (words grouped into discrete units), and no evidence of recursion (rules that apply to their own output). Thus in Pirahã, to say ‘if it rains, I won’t go’, you have to turn the if-clause into a topicalized noun:

But if Everett is right that linguistic evolution recapitulates the rest of our bio-evolutionary development — and by no means do all linguists agree that it does — it would have a rather profound potential implication: there are some languages out there that are essentially as logically complex as that spoken by our remote hominid ancestors.

These claims are controversial, in part because a small number of obscure languages play important roles in the debate, and different linguists working on the same languages come to different conclusions about them. It is perhaps safer to say that there is no debate about one thing: all modern languages are structured in a way perfectly suited to the needs and desires of the people who speak them, and in that sense, all languages spoken today are behaviorally modern.

But might there be a space-age technological civilization to speak a language with no phrasal hierarchy or embedding? it’s certainly possible. It’s just that none happens to exist on Earth.

Are There Any Primitive Languages?
Powered By the Tweet This Plugin