I came across an interesting question on Quora the other day: What was the approximate travel time between London and Rome in the 13th century?

As Frank Melling, author of “A Sixpence in the Settee,” points out, this is not a simple question to answer, as it depends on the circumstances. Are you a merchant, a peasant on pilgrimage, a priest, or a courier? Will you be walking, riding, or taking a Cog?

Read on to find out the answer – and check out Stanford’s Orbis, the great link in the end!

What a difference 900 years make

At the peak of the Roman Empire, an Imperial Messenger would cover 50 miles a day – and from all over the Empire. There are tales of Roman riders covering hundreds of miles in 24 hours when there was a desperate need. However, that was with as many changes of horse as he needed, safe areas to rest and eat, and superb, stone-surfaced roads.

Roman dispatch riders could remount every 4 miles or so at a Mutation – a small remount station. They could remount, rest, and eat every 12 miles at a Mansio.

This meant that a cavalry horse could be ridden flat-out for 4 miles and then changed. A rider could perhaps do 12 remounts in a day, and eat, and cover 50 miles.

900 years after the collapse of the Empire, major roads to the north, like the Via Claudia Augusta, were still there. However, the infrastructure to support fast travel had long since disappeared.

After the fall of Rome, the Church became the backbone of Europe. By 1215, there were over 600 monastic communities in England. It follows that the normal reason for visiting Rome at the time was religious. Usually, this would be associated with the business of one of the great monastic orders.

This was generally safe and generally comfortable. You would travel by well-behaved horse with one or two servants and stay in religious houses or the great manorial estates en route.

If on Papal business, you would have a Papal passport.

Since robbing and/or killing members of the clergy was considered to be rather bad form, travel was about as safe as it could be at the time.

Travel would be slow because it would be essential to enjoy the hospitality provided on the journey, exchange information, and observe religious festivals. So, perhaps six months would be a reasonable speed.

Diplomats traveled faster and they, too, were generally safe. It was essential that communications existed between, for example, the Angevin Anglo/French court and the Capetian dynasty who ruled what was loosely France.

However, relations were strained between England and Europe. So, your safety would depend on precisely when you traveled, as would your speed. Give or take, it is 1,200 miles to Rome and so, if you really had to press on, two or three months. Even on a mission, you still had to observe religious festivals so think more three than two months.

Pilgrims were also very much in evidence but, unlike priests, these were fair game. Chaucer’s pilgrims only traveled 60 miles, and in a peaceful England, but still went together as a group – and not just for the company. Being robbed or killed was very much a normal part of medieval life. 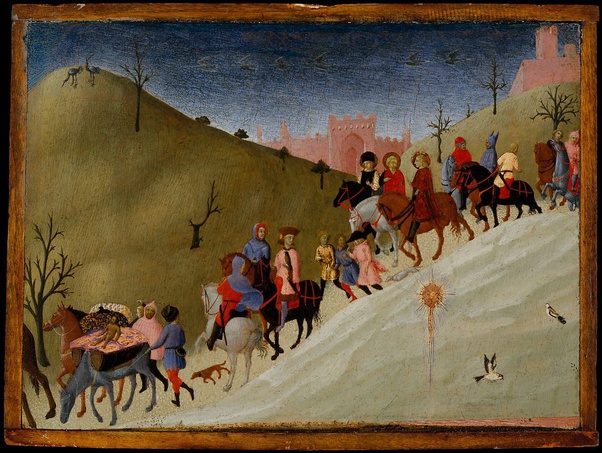 Pilgrims traveled mob-handed – and not just for the company (Image: Quora)

As for merchants, there was some commercial traffic but this was mainly for high-value goods or entertainers. This time, it was essential to have protection and, dealing from one great estate to another with some markets on the way, a journey might stretch to several years.

If, on the other hand, you had to be somewhere in a hurry, you would only carry one piece of luggage. If that was too big, you might use a carriage, otherwise a horse.

A History of Transport says that you could cover 30 miles/day (50 km) on average. London to Rome is about 1,250 miles (2,000 km) if we take occasional forced detours and badlands into account, so that puts the time to 40 days for carriage or horseman without employing the fresh horse methods.

So, was there an alternative route? Yes, the sea.

Very roughly, it is around 2,200 sea miles from London to Ostia, Rome’s port. However, the actual journey would have been much longer because sailboats can rarely travel in a direct line. Probably, 4,000 miles would have been more credible.

A well-sailed Medieval Cog, in favorable conditions, could manage 4kts – say 5mph. Theoretically, this would mean that 4,000 miles would/could take 800 sailing hours or a bit over a month.

However, this wasn’t the practicality of sailing. On windless days, only a few miles would be covered – or perhaps you might even get pushed back from where you came by the tides. On others, when there would be a dangerous lee wind blowing you on to the shore, safety would be sought in port. Sailing at night was also largely avoided. 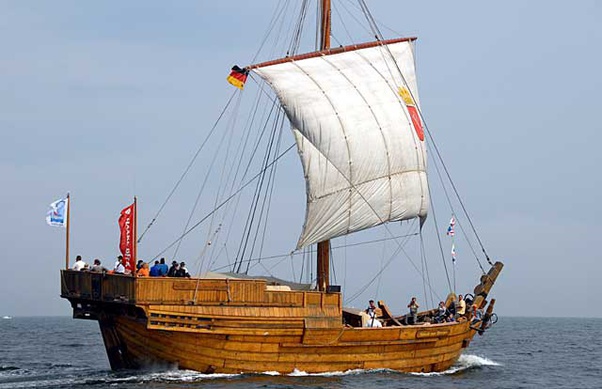 Then most vessels would trade their way from port to port, which would slow down the actual travel time.

With everything going really well, this might take you two and a half months. The advantages would be that, storms and pirates apart, it was a safer and easier way to get to Rome from London, there was plenty of luggage space in a Cog with a 200-ton carrying capacity, and the journey was generally more pleasant and comfortable than traveling overland.

However, the Barbary pirates were a very real concern. Striking off the North African coast, they took many, many Europeans as slaves.

Do you want to calculate travel times for your heroes depending on the season, urgency, and a number of other factors? Stanford has created a godsend for us authors: Orbis, a program that calculates how long a journey might take you depending on the year and the type of travel:

The Stanford Geospatial Network Model of the Roman World