What Does Fantasy Get Wrong about Medieval Warfare?

Largely thanks to Tolkien, the fantasy genre consists basically of how we imagine the Medieval times. Readers of this blog will know of my many articles on the Middle Ages and my keen interest in historical accuracy. In the interest of improving our (fantasy) writing, I’m sharing here some great information from Quora on what fantasy often gets wrong about Medieval warfare.

As this is a long post, I will start by summarizing some key points about Medieval warfare (and life in general) here:

And now for the detailed answer.

Many people, when thinking about medieval warfare, picture guys with swords charging at each other like a bunch of drunken maniacs cutting and slashing at each other until only one side is left standing.

People see this in Braveheart and think that is how battles were fought: 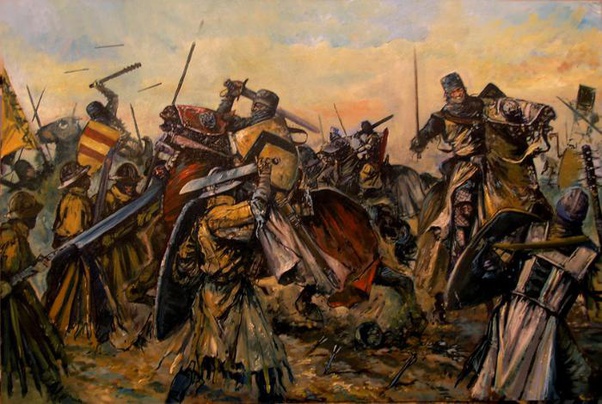 To understand how sword fighting worked, picture yourself in a crowded area.

Now, picture yourself in a crowded area as densely populated as what you imagined — only now, everyone has a shield, armor, and weapons.

Finally, just imagine how hard it would be to take a sword out and start swinging at it when you would be barely able to twitch your muscles.

Keep in mind as well, that, aside from chain mail being nearly impossible to cut through, so are your calf bones, which are stronger than cement.

Professional executioners using an ax in sixteenth-century England were expected to severe the neck with an ax in TWO blows. The neck is far easier to cut through than a calf, and the ax — which is definitely stronger than a sword when used properly — still took an average of two swings by a professional executioner to carry out. 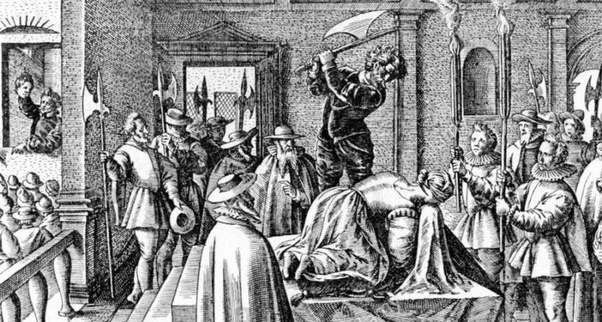 Above: Artist Depiction Of The Execution Of Mary Queen Of Scots. Source: Quora

Mary Queen of Scots even reportedly took anywhere from three to four blows to severe. Granted, the executioner in her case was not as experienced, though that does not explain why it would take three to four swings to cut her head off when Mel Gibson in Braveheart was able to cut an English soldier’s leg off, despite being covered in chain mail.

Using fists, feet, and even your body is much faster, more accurate, and consumes less energy than swinging about a medieval sword (and that is assuming one has the space to do the last thing).

Furthermore, even when battles were far less sparsely populated, the use of swords was not something which armies frequently relied on, as swords wore out and broke quite easily if they made physical contact with metal on a regular basis.

Also, swords were very expensive and time-consuming to produce. Wasting your sword over a fantastical sword fight was neither beneficial to the army itself, nor to the sword-bearer, who would probably have to pay for a new sword out of his own pocket (national armies were centuries away at this point).

Even Samurai, contrary to popular belief, did not like using swords, as the use of swords was seen as a low-class military role.

Rather, what Samurai enjoyed doing more than anything else was to ride horses and use their bows and arrows (either on horseback or foot).

Swords were never relied on by any notable army unless the enemy got too close and engaged them in close-quarter combat (the attacking army was more likely to do so if they had far superior numbers to their enemies). 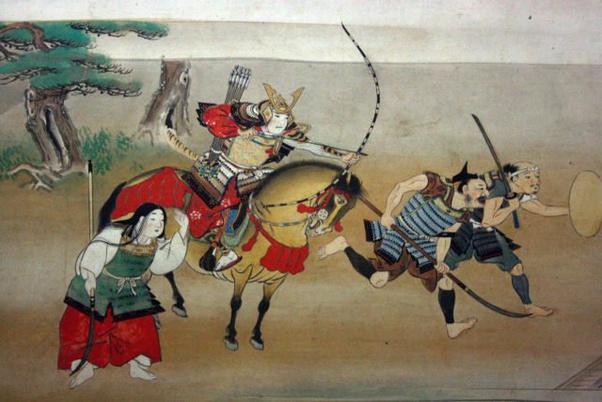 Above: Samurai Warrior On Horseback Firing Arrows While His Subordinates Charge On Foot With Swords. Source: The Equipment of the Samurai – Fearsome Warriors Armed to the Teeth

The bow and arrow are also somewhat mythical, as people picture random archer units spraying down row upon row of attacking enemies like a modern machine gun.

In reality, arrows were far better at crushing the armor and causing dents than they were at actually penetrating it. This could prove serious for the one being pelted by arrows, as it would mean that they had the potential of being quite literally crushed inside their own armor if hit too many times, even though traditional arrows were unlikely to break through it. 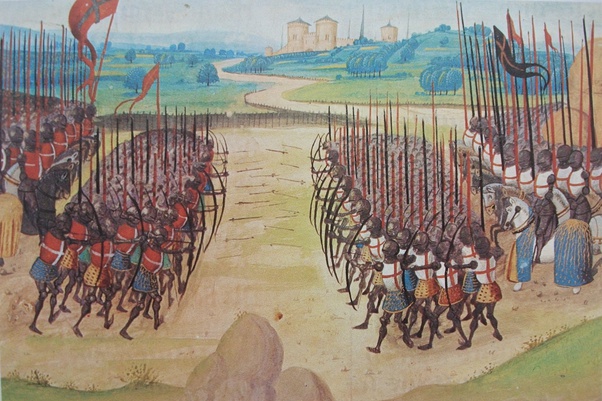 Above: Somewhat Inaccurate Depiction Of The Battle Of Agincourt On October 25, 1415. Source: Quora

The English longbow could reportedly puncture the armor used during the early medieval ages, though this dominance (first seen at Halidon Hill in 1333 and again at Crecy and Poitiers in 1346 and 1356 respectively) was short-lived.

Evidence from scientific/military documentaries suggests that by 1415, when the Battle of Agincourt took place, French armor was strong enough that the longbow arrow would not have been likely to penetrate the armor of the attack French even at fairly close range. 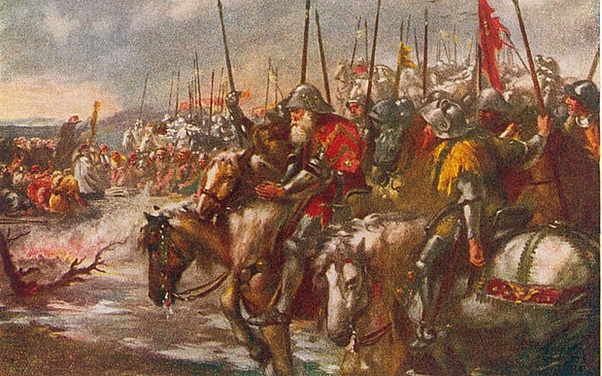 Horses are often treated as some sort of rolling tank capable of slaughtering everyone in their sights. Source: Quora

In reality, horses were far better at chasing down fleeing enemies during pandemonium than they were at taking part in an actual battle. 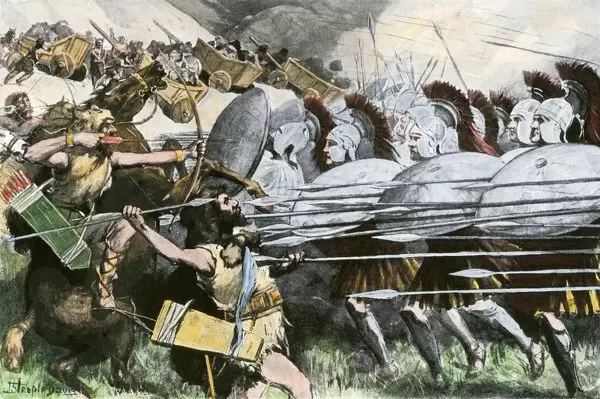 Above: Artist’s impression of colliding infantry. No, archers would not have been standing In front of hoplite infantry like this unless they had a death wish. Source: Quora

Until the age of gunpowder, the most common way a battle was fought was for both armies to quite literally press their infantry against one another in a game similar to tug of war, except that rather than pulling, the players are pushing.

Over a period that could last from minutes, to hours, or even days, both sides would steadily exhaust themselves. 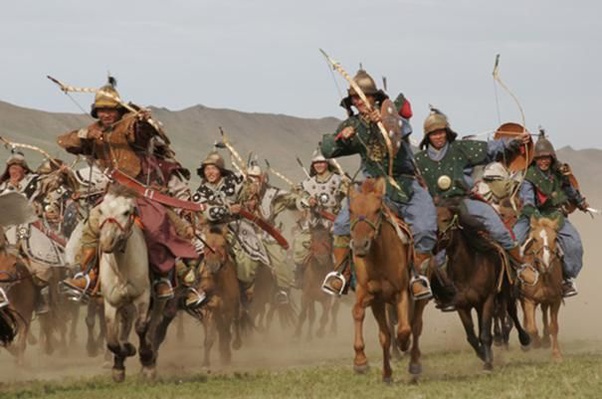 At some point, one side would start wavering once they realize that their side is being pushed back, and panic would start breaking out within the ranks.

Soldiers on losing sides often took their armor off of them before fleeing, since it is much faster to flee on foot from a pursuing enemy when you are lightly dressed.

Meanwhile, the cavalry would usually see its biggest role in a battle at around this time.

Witnessing the thousands of fleeing enemies running in terror — often causing some of their men to fall and be trampled to death — the cavalry would be sent in to ensure that the pandemonium continues.

In all likelihood, soldiers in battle were far more likely to be killed by their own men during the panicky chaos than they were to be killed from the actual fighting. 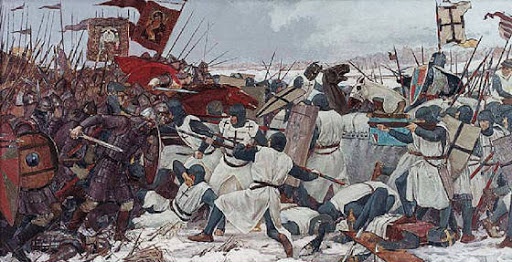 Above: Collapse Of The Teutonic Army At The Battle Of Tannenberg July 15, 1410. Source: Quora

The mass flight of men probably explains why medieval battles — Agincourt definitely not being exceptional — often had casualties that seemed very lopsided in favor of the winners.

For instance, depending on whose sources we want to believe, the English only lost between 29–100 men out of 6,000 who fought at Agincourt, while the French may have lost over 10,000 men out of 30,000 who fought, with the majority of French being reportedly killed during the final minutes of the battle when the routing commenced. 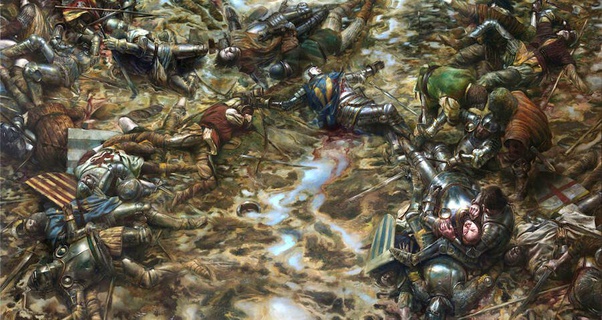 Special thanks to Michiel Bogaert, David Frigault, Brett Fleur, and several commenters for their insight!

What Does Fantasy Get Wrong about Medieval Warfare?
Powered By the Tweet This Plugin