Getting Married in the Middle Ages

Whether you’re writing Medieval history fiction or fantasy, you will appreciate this Quora answer by Helena Schrader, who borrowed from an article she wrote for The Medieval Magazine. To this, I have added information by Brent Cooper, taken from medievaltimes.com.

Getting Married in the Middle Ages

First, a caveat: the Middle Ages lasted a thousand years in places as different as Iceland and the Holy Land. So, things differed from place to place and from time to time. After all, did your grandmother get married in a similar way to you?

No matter where and when, though, a general fact about marriage in the Middle Ages is that it was usually an economic affair.

This is not to say that the parties to a medieval marriage inherently lacked affection, passion, or sexual attraction. However, economic considerations played an important role in marriage negotiations and contracts. Whether reigning kings or serfs, marriages were made for many reasons — to increase family fortunes, secure offspring, and resolve conflicts. Yet, whatever the reason for a marriage, contracting parties were careful to consider the economic consequences — for both parties. 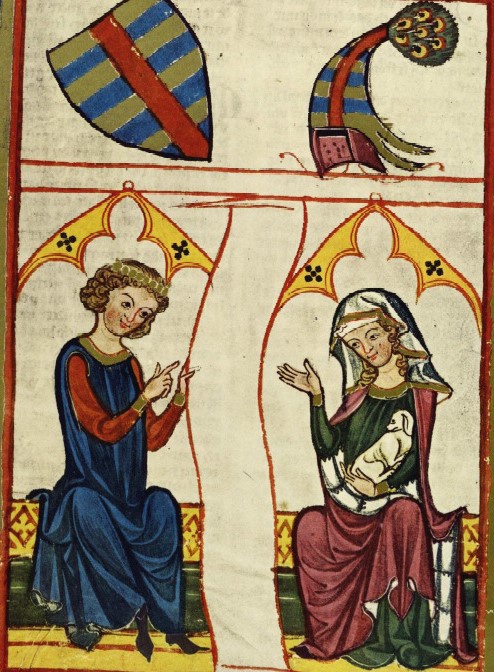 Despite what you may think, the church was actually rather progressive when it came to marriage. It viewed marriage as a sacrament and fought a long, tenacious, and sometimes bitter war against polygamy, incest, and divorce. It disapproved of a purely materialistic attitude toward marriage, which it associated with pagan practices.

In the ninth century, Archbishop Hincmar of Reims (806-882) established the following criteria for a legitimate marriage:

In the twelfth century, even more radical views were put forward. Theologian Peter Lombard (1095-1160) and the Benedictine monk Gratian, both argued that the essence of a valid marriage was consent alone.

Gratian, in particular, published a masterwork of medieval religious literature in about 1140. He argued that the spiritual union created by the sacrament of marriage ought to be supplemented by “physical union,” but even this was not necessary to make a marriage. Furthermore, Gratian fully recognized what we would call “common law” marriage, in which two people demonstrated consent simply by the act of living together as man and wife.

Lombard, on the other hand, argued that consent could not be de facto (i.e., the act of living together), but required vows. Significantly, however, he denied that vows need not be said in front of witnesses, much less clergy. The only restriction was that for vows to be valid, the male had to be at least 14 and the female 12.

Neither Gratian nor Lombard saw contractual arrangements about property as material to a marriage.

While the church offered couples in love a safe haven, at least in theory, property mattered, particularly among the upper classes. Parents controlled their children — the boys no less than the girls — and they arranged most marriages, often when children were far too young to legally consent.

They circumvented church rules against such marriages by making “betrothals,” in which the parties agreed to marry in the future (when they reached the age of consent) — or simply by getting dispensation for the canonically invalid marriages of children. Either way, economic factors played a role in marriage negotiations and contracts.

Marriage among peasants and serfs reflected aristocratic practices at a microeconomic level.

Among the peasantry, marriage alliances might be about adjacent or fertile fields, pastorage, a house, a horse, or mill rather than counties and castles. Yet, such arrangements were arguably even more fundamental to marriages because they were essential to securing the economic base of the new family.

Indeed, the goal of the economic arrangements for all these marriages was to provide the married couple and their offspring with sufficient means to ensure a lifestyle in accordance with their station.

Despite what you might think, the “economics” of medieval marriage was anything but misogynous.

Medieval brides were no more pawns than were their bridegrooms, and the marriage contracts provided financial protection for both parties, particularly for widows.

The key components of medieval marriage contracts were dowries and dowers. The former benefited the man, and the latter his wife. However, while dowries were mere custom, dowers were viewed by some clerics — as noted above — as an essential component of legal marriage.

After the marriage was arranged, a wedding notice was posted on the door of the church. The notice was put up to ensure that there were no grounds for prohibiting the marriage. The notice stated who was to be married, and if anyone knew any reasons the two could not marry they were to come forward with the reason. If the reason was a valid one, the wedding would be prohibited. 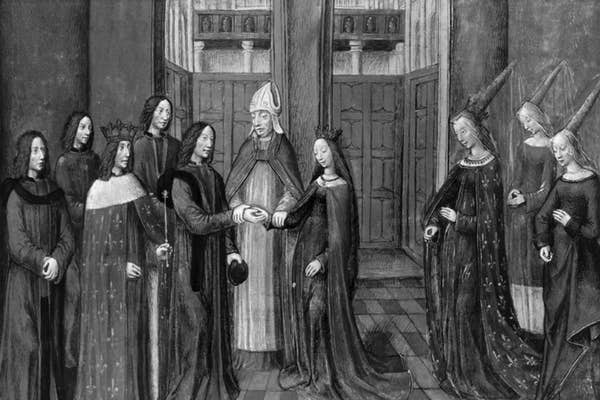 There were several reasons for prohibiting a marriage:

The church ceremony in the middle ages took place outside the church door before entering for a nuptial mass.

The priest would begin by asking if anyone present knows of any reason why that couple should not be married. The priest would then ask the bride and groom so they would be able to confess any reasons for prohibiting their marriage.

Many of the items and rituals that took place during the time of a wedding have become traditions and are practiced today.

The marriage ceremony, for example, contains much of the same wording that was used in the middle ages.

Today, the man and the woman stand on the same sides of the altar as they did then.

The wedding ceremony of today also includes a ring exchange, and the ring is placed on the fourth finger, the same finger it was placed on during the middle ages.

Furthermore, a couple and their families would have a large feast after the wedding, a tradition that is still carried on in today’s society with the wedding reception.

Oh, and if you’re wondering how well marriage is doing nowadays, check out this interesting post on marriage and divorce statistics!