When writing fantasy, we often have to describe fight scenes. Swordfights, in particular, make for great descriptions. But we often forget one crucial aspect of fighting: when it comes to life or death, everyone cheats. Even the good guys, as Martin Lloyd points out on Quora.

Miyamoto Musashi is one of history’s most celebrated swordsmen. But he was not the quintessential samurai. He was the quintessential anti-samurai. Where samurai went right, he went left. Musashi was famous for a unique style of double-bladed swordsmanship (it wasn’t unique if other samurai were doing it) and winning his duels through trickery (which other samurai fell for).

Musashi’s philosophy was essentially a “strategist” beats a “sword fencer”, so he probably cheated on principle to prove it.

Before he entered his first duel, his father started apologizing to the guy Musashi was supposed to fight. Musashi surprise-attacked him and beat him to death with a quarterstaff. Stunningly, this gets interpreted as a stroke of brilliance, as opposed to a well-established way of cheating.

Others of his strategies were actually clever instead of underhanded. For example, when he dueled Sasaki Kojiro, Musashi used an extra-long bokken. This is because Kojiro relied on an unusually large sword, so he was used to having a reach advantage over his opponent. Losing the reach advantage meant losing the battle.

However, the running theme seems to be other samurai were completely unprepared for Musashi’s tactics.

Not that chivalrous knights were above this sort of tricks, as this excerpt from Fiore dei Liberi demonstrates:

This poleaxe of mine is filled with a powder and is hollow and perforated. And this powder is so strongly corrosive that the moment it touches your eye, you will no longer be able to open it, and you may be permanently blinded.

My most noble lord, my Marquis, there are some vicious things shown in this book that you would never do. I show you them purely to aid your knowledge.

This is the powder that you use in the poleaxe drawn above. Take the sap of the spurge, and dry it in a warm oven to make a powder. Now take two ounces of this powder and one ounce of powder of fior d’preda, and mix them together. Now load this powder into the poleaxe shown above. You can do this with any good caustic powder, but you won’t find a better recipe than the one in this book.

Basically, this guy is saying, “Do not do this cool thing which I even gave you a recipe for.”

And a German manual from 1430 includes the dreaded “end him rightly” – unscrewing a pommel from a sword, to throw the pommel at them, to surprise them and make them duck or flinch while you follow up with a spear or maybe the sword. 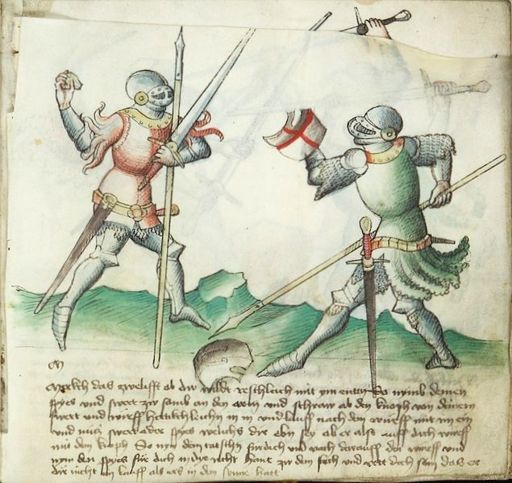 In “The Secret History of the Sword,” J. Christoph Amberger has a story about a German swordmaster who ended up in a duel against a less experienced swordsman. The two of them arrived at the field of battle with their two-handed swords, upon which the swordmaster shouted, “We were supposed to battle one on one! And you brought your friends with you? Look at all those people!”

Upon his opponent turning around, the swordmaster cut off his head from behind and went back to the bar, where he told his friends, “Fight’s over. I taught my opponent a new trick which he’d never learned before.” 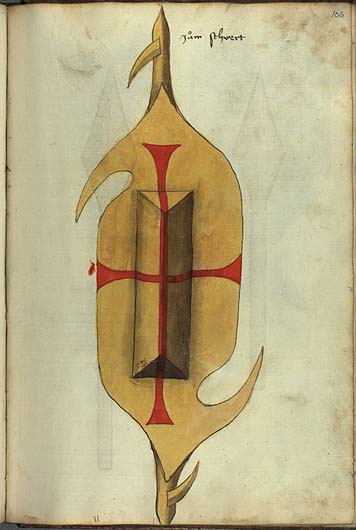 These things were used as weapons in part because it is SO outlandish neither fighter is expected to have experience with them.

Also, duellists were sometimes dressed in oiled leathers before the duel to prevent either fighter from grappling and gaining an advantage. Other customs had duellists strip down to the waist, because they knew some sneaky person would wear armor under their clothes otherwise.

And a duel between a man and woman was set up with the man in a waist-deep pit to mitigate the strength and size difference. 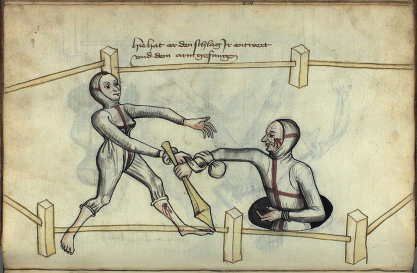 In short, it seems to be a given among western swordsmen that everyone will cheat like a weasel to win unless outright prevented.

For more on pommel-launching swords, check out this fascinating video from Joerg!

Every Swordsman Cheats
Powered By the Tweet This Plugin