For those who missed the news, Amazon has just released Kindle Oasis, the company’s next big step towards its goal of digital paper. Its thinnest, lightest and most expensive e-reader yet has a new design with 9-week reading battery, ergonomic grip, and page-turn buttons. 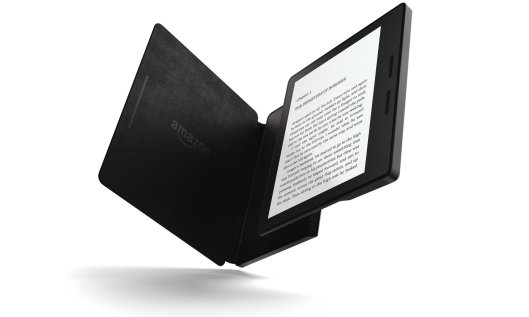 As reported in the Guardian, Chris Green, vice president of industrial design of devices for Amazon said:

The Kindle is like a hammer, a single purpose device, and this is the best we can make it. We’ve found that the more that sits in between the reader and the book, the less engaged they are with it. The Oasis is our best Kindle yet at getting out of the way and sending people down the rabbit hole.

The new Kindle has the next generation of Amazon’s touchscreen Paperwhite display, with previous versions seen in the top-end Voyage and Paperwhite. It has the same screen density of 300 dots per inch similar to printed books, but the new display has moved the front-light LEDs to the side, providing space for 60% more lights, increasing the screen’s brightness and even lighting.

The Oasis will last for two weeks on its own, but is sold with a high-quality case that attaches magnetically to the back of the device, which charges the Kindle’s internal battery at a rate of 1 hour’s reading time every 10 minutes and adds a further 7 weeks’ battery life. The case also turns off the screen, sending the Kindle into a new lower-power hibernation state when closed and protects it when not in use. 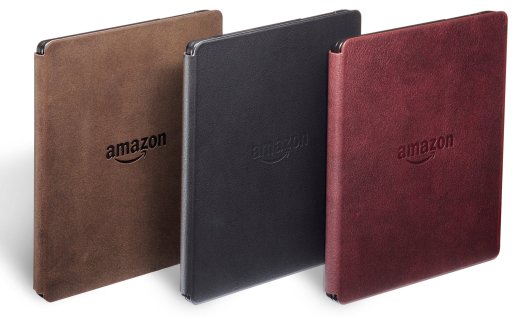 About the battery, Chris said:

We’re now measuring battery life in months because no one wants to be stopped from finding out who the killer is because the battery dies.

The Oasis, which becomes the fourth e-reader in Amazon’s current lineup, is very much the new flagship Kindle above the already premium Voyage with a price to match. Available for pre-order today and shipping within two weeks the Oasis will cost $289.99 for a Wi-Fi-only version.

In a statistic of particular interest to authors, Amazon has said that its Kindle store now has 4.4m ebooks available, with 1.1m added in the last 12 months and 1m exclusive to the service.

Our Kindle sales are up, people are reading more ebooks than ever before and we’re investing more money in devices and the store. We are fully committed to the ebook market.

Find out more and compare the various models on Amazon.

New Kindle: Oasis
Powered By the Tweet This Plugin