A page from the Syriac Sinaiticus. (Photo: Public Domain/WikiCommons)

Not many people will have heard of the Syriac Sinaiticus – one of the earliest known copies of the Gospels, dating back to the mid-4th century. The translation it preserved went all the way back to the 2nd century, very close to the fountainhead of early Christianity.

Even fewer people may have heard of the Scottish twins, Agnes and Margaret Smith, who discovered it in a dusty closet in an Egyptian monastery in 1892–without a university education or formal language training between them.

Atlas Obscura recently shared their amazing story, which I’m now sharing with you. 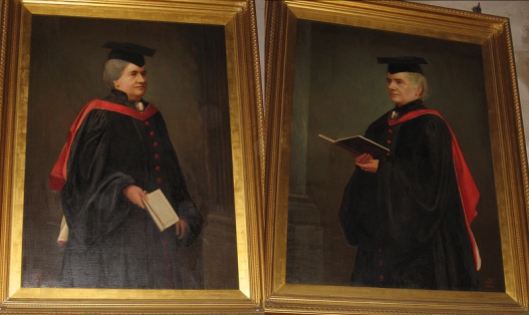 Born in 1843 and raised by their father, the twins were inseparable from a young age. And they were privileged: Educated as if they were boys, for every language they learned, the girls would be taken to that country by their father. And so it was that the twins had mastered French, German, Spanish, and Italian by their teens.

When their father died, leaving them a huge inheritance, the sisters were 23. Alone in the world and now exceptionally wealthy, the young women took a trip to Egypt.

This was hardly a pleasure trip–dysentery, cholera, and other infectious diseases were rife, and at points the twins did not know if they would return from their journey down the Nile. The voyage was a small disaster; they were supposed to visit various religious sites along the route, but their dragoman kept the sisters as virtual prisoners on the rat-infested sailboat he’d convinced them to rent. Following the river trip with a visit to Jerusalem, the sisters were in the Middle East for nearly a year.

Upon their return to Britain, they dedicated themselves to mastering more languages, including ancient and modern Greek, Hebrew, Arabic, and Syriac, a dialect of Aramaic.

In 1890, the twins settled in Cambridge. Even though the university was barred to women students, the scholarly city should have been a perfect spot for these self-taught linguists. However, the insular Cambridge set cast the twins as outsiders with their gaudy home, their lack of husbands, their expensive dresses, bonnets and private coach. The twins’ eccentricities, like exercising in the back garden in their bloomers, didn’t help.

Following their husbands’ deaths, the twins left Britain once again. In 1892 they ventured to Egypt’s Sinai Desert, armed with a tip from the Cambridge-based orientalist James Rendel Harris to search out a dark closet off a chamber beneath the archbishop’s rooms at St. Catherine’s–perhaps the world’s oldest Christian monastery –where there were chests of Syriac manuscripts that Harris had noticed, but hadn’t been able to inspect on his last trip to the monastery.

They were hoping these manuscripts might contain early versions of the gospels, as the western Christian world was clamoring for finds that could disprove some of the questions Darwin had raised about the veracity of the Bible.

And so Agnes and Margaret Smith braved an area where, a brief decade before, one of Cambridge’s leading Arabic professors was murdered by bandits. Agnes had been learning Syriac–a branch of Aramaic, the language Jesus would have spoken–in the six months before the trip. Which is just as well, as she managed to do what so many male professors and scholars had failed to do in their searches of the monastery: she found what appeared to be an ancient manuscript of the four gospels.

The twins couldn’t be sure of their find, but nevertheless they were convinced enough to use almost all of their film on photographing the palimpsest. However, back in Cambridge, the university’s professors dismissed them at first as dilettantes. When they persisted, the professors finally agreed to give their photos a proper look. Stunned by what they saw, they immediately put together a group of scholars, including three world-class transcribers–Professors Robert Bensly, Francis Crawford Burkitt, and Rendell Harris– to go back to the monastery and transcribe the manuscript.

Another page from the Syriac Sinaiticus. (Photo: Public Domain/WikiCommons)

The amazing discovery made the front pages. However, ironically enough for the male establishment and Cambridge’s professors, the newspapers only had eyes (and column inches) for these eccentric twins who’d come out of nowhere. Bensly and Burkitt were livid–they saw the women as uneducated upstarts who had stolen their claims to fame. Sure, the male professors did not dispute that Agnes had physically come upon the manuscript, but they refused to credit her with much more.

Still, and while the men stewed, the twins became public figures who were finally accepted into scholarly society: There were invitations from eminent professors across the country, and honorary degrees from St Andrews, Heidelberg, Trinity College and Halle.

Margaret died in 1920, and Agnes in 1926. During their lifetime, the University of Cambridge never recognized the sisters for their monumental scriptural find of the Syriac Sinaiticus. Then again, the university also denied women full degrees until 1948…

You can read more about the twins’ amazing story on Atlas Obscura.