New Pearseus Map and a 17th Century Map of the Skies

May 27, 2016 | Fun Historical Facts, Maps and Infographics, My Publications

Prompted by my recent post on maps in fantasy,  I edited the Pearseus map I’d drawn for the Robinson Companion. The new map, seen below, is in high resolution (2700×2200) and includes Caria, a location first mentioned in Endgame, the upcoming last book in the series.

A 17th Century Map of the Skies Bursting With Mythological Creatures

You can also feast your eyes on this stunning, hand-illustrated star chart from 1670, found on Atlas Obscura. The map is the work of Frederik de Wit, a Dutch cartographer from the 17th century.

Since the 14th century, we have identified 88 constellations in the sky, named after mythological figures or the shapes they seem to take. These constellations often ended up on star charts. The above star chart shows solar orbits and the lunar phases in addition to mapping and stunningly illustrating the constellations visible from earth.

The careful attention to detail given to the main star chart carries onto the borders of the map, which feature cross-hatched blue clouds and lettered pink scrolls. It is in the main star chart, however, that the details become even more impressive.

For example, this beautifully-rendered horse with rainbow wings in the upper left of the map is actually the mythical creature known as Pegasus. He is said to have created the fabled Hippocrene, a fountain on Mt. Olympus, by digging his hooves into the ground. The constellation named for the winged stallion was one of the 48 listed by Ptolemy in the 2nd century AD, and is one of the 88 we recognize today. 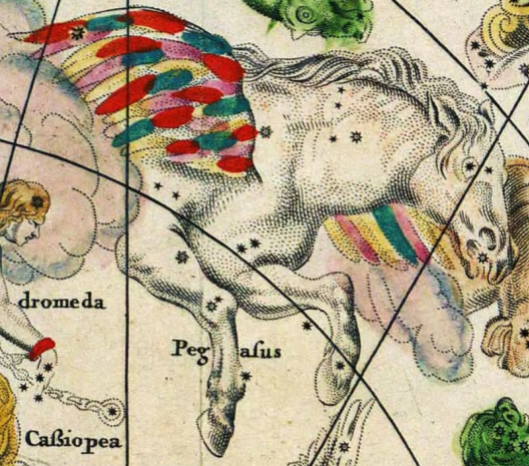 In between Pisces and Aries stretches the figure of an enormous sea monster. Known as Cetus, this mammal-fish hybrid also derives from Greek mythology. As the tale goes, the goddess Cassiopeia incurred the wrath of Poseidon, god of the seas, when she proclaimed that her daughter Andromeda was more beautiful than the sea nymphs known as the Nereids. A furious Poseidon sent the sea monster Cetus to attack, and to satisfy the beast Andromeda was tied to a rock on the sea. Demigod Perseus learned of this and arrived in time to save Andromeda and slay the beast. 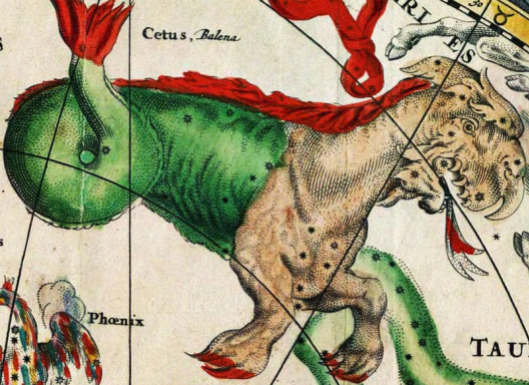 You can read the full post on on Atlas Obscura.